Hard to believe that it's been ten years since so much about America has changed. There are things today that we never thought would exist, never thought that they would be so much a part of our lives that we just... let them go.

I realize last year I didn't blog about the day. But the two years before that I did. And the year before that as well.

I'm not going to repost it. It's searchable on my blog if people are interested, under 'September 11'.
Posted by K at 6:41 PM No comments:

I never thought I'd say this. Never ever. But I'm... burnt out on leveling right now.

I really really want to play my enhancement shaman... I just don't want to do the quest/instance grind to get through outlands. My other option is to try to realm-transfer Karika and respec her enhancement for a while. Maybe also Kathe and respec her healing. I don't want to do that, because I think one of the things that helps me learn a spec is to level AS the spec. And ... well, I won't be doing that. But just don't think I can do it.

Otherwise, things are going great. The game is still going good. The Nook is still delicious.

We're fostering a puppy. She's abso-friggen-lutely adorable! Even Chewie plays with her! Yoda is a grump. So he doesn't.

Work is going great. D is working with me at my second job, as a vet-tech! So that's good. :)

Scans on him went well recently. No masses, no regrowth, no recurrence.

I no longer admin at Unsung Heroes. Instead, D and I have our own place up at agrajag.rpg-works.net 1138 -- it's a split themed game, Old Republic and Rebellion Era.

It's doing swimmingly! 20-25 people on per evening, sometimes more. Most are individuals, we don't have as many alts on our game (most people just have two). We usually get over 150-200 noms a week. Which is pretty good, I think.

Some of the things we had tried to implement on UH but couldn't are now implemented, and working well, I think!

We filed for bankruptcy. Our house was foreclosed. D's brother is getting out from the hospital after having been split open with a MRSA infection.

Hypocrisy still irritates the heck out of me. I do one thing, one singular thing, and it's OMG WTF BBQ. Someone else does something, lots of somethings, continuously, and it's meh, no big.

I'm coming up on a year at my current duo of employment places. So far so good.

And that's really life in a nutshell. I'm back to playing some WoW, when I'm not RPing or running plots on Generations (our game). D is playing Rift. Big surprise there - the next MMO! He can't wait for Skyrim or whatever the next Elder Scrolls game is called.

Bunnies are still fighting, but we're working on it. Silly bunnies. You should be friends!

A game. Of course it's about a game! Silly.

My computer crashed and burned, so I'm on the old laptop. Work is going splendidly.

And life continues on.

We have a 8x7 corral in the living room for the bunnies, since we couldn't figure out how to cordon off the entertainment center and all the wires. Or the baseboards. :P

And the game... goes well. Boon is a wizard there too now. The game is flourishing. When I started, there were maybe 10 people on the game. Now we average probably 25+ individual players. We have maybe 35-40 PCs logged in (some are alts) every day.

It's ... fun. Work at times, since with a big playerbase now, everyone needs something. But fun. :)

It serves as a nice creative outlet for me. And a social game.

I have two great old (three if you count an NPC) favorite characters of mine there. Keisha Vorr, Kithan the Squib, and Yamuzi the Laboi.

So, I check my blog and I find out my last post had 18 new comments, all with strange characters, with one comment reading: 'if the quantity is not a lot, I will hand carry it', or something to that effect.

So... I'm sorry, but I have to switch over to moderated comments only. Because I have no idea what people were using the comments section of my blog for, but I don't like it.

Save me. We now have TV. And Fox News.

I've seen more of Bill O'Reilly and Glen Beck than I ever wanted to, and it's only been three days!
Posted by K at 2:05 PM 1 comment:

I have several stories. And lots of writer's block to go with them!
I've read where people say that you just need to sit down and get the words out, no matter how bad they sound. I can't quite wrap my brain around that concept. If it doesn't read right the first time, I assume it's trash and just junk the whole thing.

My bad, I suppose. Ah well, we'll see where this new set of stories winds up.

As for other things... new job interview completed. Let's see where it goes. Whee!
Posted by K at 2:52 PM No comments: 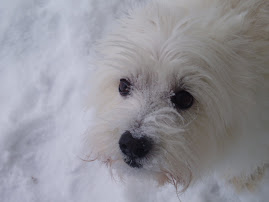